According to Jennifer Lombardi, a certified eating disorder specialist and the manager of behavioral health for the Kaiser Permanente Sacramento Medical Center, “The Covid-19 pandemic has created what’s considered to be the perfect storm of high-risk factors for eating disorders.” The main issue lies in eating disorders on the rise because they thrive on secrecy. “During the pandemic, when people are fearful, stressed, and disconnected from others; it’s challenging for them to use healthy coping mechanisms.”

Overall, the above-mentioned link between covid and eating disorders is referencing what ultimately led to an increase in eating disorders such as bulimia, binge eating disorder, and/or anorexia. One of the eating disorder studies indicated that the hospitalizations for eating disorders had doubled alone in 2020. The full impact of the Covid-19 pandemic on various individuals’ healthy eating habits might not fully be discovered in completion for some time.

What Is an Eating Disorder?

An eating disorder is considered a very serious and complex mental illness. It can be life-threatening if not addressed as soon as possible. They aren’t a lifestyle choice or a diet that has gone too far. It is often characterized by disturbances in thoughts, behaviors, eating, attitudes towards food, and body weight or shape.

The lifetime prevalence is an estimation at 8.4% for women and 2.2% for men. About 9% of the U.S. population, or 28.8 million Americans will have an eating disorder in their life. Roughly 10,200 deaths per year are a direct result of an eating disorder, which adds up to 1 death every 52 minutes.

This is a condition in which individuals avoid food, eat very small quantities of food, or severely restrict their food. They might also weigh themselves repeatedly. When these individuals are dangerously underweight, they might see themselves as overweight.

In addition to the above-mentioned action, those with anorexia nervosa binge-purge subtype experience binge-eating and purging episodes. This means they will eat large amounts of food in a short period. It is then followed by vomiting or even using laxatives or diuretics to eliminate all that was just consumed.

This condition is when individuals experience frequent and recurrent episodes of eating an oddly large amount of food and then feeling a lack of control over these episodes. The binge eating episode is then followed by behavior that makes up for overeating such as excessive use of laxatives and diuretics, forced vomiting, excessive exercise, fasting, or a combination of these behaviors. Individuals with this disorder might be normal weight, overweight, or slightly underweight.

The avoidant restrictive food intake disorder, also known as (ARFID), which was previously known as a selective eating disorder, is a condition in which individuals limit the type or the amount of food eaten. Unlike anorexia nervosa, individuals with ARFID, do not have an extreme fear of gaining weight or a distorted body image. This condition is the most common in middle childhood and generally has an earlier onset than various other eating disorders. 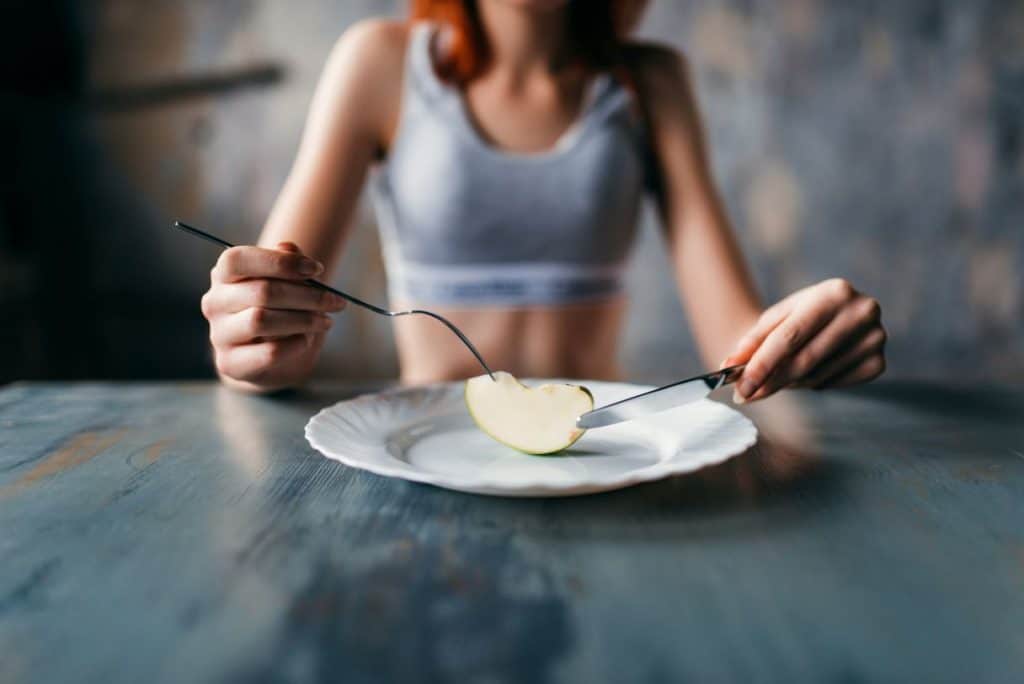 Signs and Symptoms of Eating Disorders

Symptoms of Anorexia Nervosa That Can Develop Gradually

Eating disorders can also occur during childhood or later in an individual’s life. Researchers have dived further into eating disorders studies and discovered that they are caused by a complex interaction of biological, psychological, social, behavioral, and genetic factors. Utilizing the latest science and technology to better understand eating disorders, it’ll make a world of difference in the future.

There is one approach that involves the overall study of human genes. Eating disorders are known to run in families. Researchers are working on identifying DNA variations that are linked to the overall increased risk of developing eating disorders.

Also, brain imaging studies are providing a more concrete understanding of eating disorders. For example, the researchers have discovered differences in the patterns of brain activity in women with eating disorders compared to healthier women. This type of research can assist in guiding the development of new means of treatment and diagnosis of eating disorders.

Often, obesity is cited as a risk factor for individuals with severe COVID disease and poor outcomes even in younger individuals. Overall, this news could have triggered disordered eating patterns in more vulnerable people. According to the study published by JAMA Network, it was revealed that the number of hospitalizations for eating disorders including bulimia, anorexia, and binge-eating disorders, among others, dramatically increased during the pandemic.

According to Dr. Kelly Allison, who is one of the researchers on the study and the director of the Center for Weight and Eating Disorders at the Perelman School of Medicine at the University of Pennsylvania, the overall results suggest the following: “that disordered eating became more severe in disorders of extreme restriction, as well as in those with loss of control eating.” What’s even more troubling than that statement is that the average age of patients has also decreased over time.

Learn More About the Relationship Between Covid and Eating Disorders

In today’s blog, the overall relationship between covid and eating disorders should have been thoroughly explained, along with eating disorder studies. Eating disorders on the rise are an extremely serious concern to be addressed. Here at Discovery Institute, we understand the importance of seeking treatment early for mental health disorders.

Mental disorders such as anxiety and depression stem from something: whether that is trauma, abuse, unemployment, familial relationships, eating disorders, or other personal issues. Complete recovery is possible with one of our facilities. Let’s get started today on the journey.

Meet our team of addiction experts.

Find out what makes us different.

We offer unique treatment programs for any set of needs.

Speak to an Expert